Monique worked as the sound recording archivist of the John Donald Robb Archives of Southwestern Music at the Center for Southwest Research. She sent me more information on the history of colcha, and here is an edited version of her remarks:

The designs of Castelo Branco embroidery are so similar to New Mexico colcha. There was a period of time when Portugal was under the dominion of Spain, thus the accomplishments of the Portuguese were overlooked. King Philip II of Spain entered Portugal in 1580, and it was not till 1640 that Portugal regained its independence. However, during this time of expansion and flourishing trade, goods made their way to Mexico and on to New Mexico.

The Portuguese were the masters of the seas. When Afonso de Albuquerque, a Portuguese navigator and explorer sent to India in 1508, conquered the island of Goa in 1511, he opened a trade route to Europe (Albuquerque is also the name of the biggest city in New Mexico). Among the imports were magnificent bed covers, coverlets with the similar design as the one in Castelo Branco and also northern New Mexico. Coverlets (colcha) were viewed as exotic luxuries. According to the author Nicolau de Oliveira (1566-1634), “there were no ships from India that does not bring at least four hundred.” 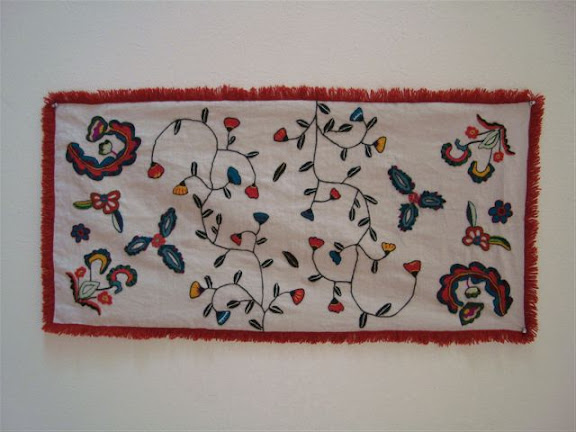 Can any of my Indian readers tell me which Indian embroidery styles may have inspired these?

Monique also sent me a list of books on colcha embroidery:

A lot of the books are available at a library nearby, so I’ll be checking them out myself sometime soon. I’ll keep y’all updated!

9 Responses to History of Colcha embroidery