My Saudi friend helped me out again!

The picture below shows the Kaaba in Mecca, Saudi Arabia. The Kaaba (Arabic: الكعبة‎) is a cube-shaped building in Mecca, Saudi Arabia, and is the most sacred site in Islam. The Qur’an states that the Kaaba was constructed by Abraham and his son Ishmael, after Ishmael had settled in Arabia. The building has a mosque built around it, the Masjid al-Haram. All Muslims around the world face the Kaaba during prayers, no matter where they are (Wikipedia entry).

See the gold lettering on the black cube? That is actually a black silk cover with goldwork calligraphy! You can see the bricks at the bottom under the cover (which is called the Kiswa or Kiswah, كسوة, English spellings of Arabic words are not exact).

From the Wikipedia article on the Kiswah: The Kiswah is draped annually on the 9th day of the month of Dhu al-Hijjah. Every year the old Kiswah is removed, cut into small pieces and gifted to certain individuals, visiting foreign Muslim dignitaries and organizations. The cover is 658m2 and is made of 670kg of silk. The embroidery contains 15kg of gold threads. It consists of 47 pieces of cloth and each piece is 14m long and 101cm wide. The Kiswah is wrapped around the Kaaba and fixed to the ground with copper rings.

I found some photos of the Kiswah being draped over the Kaaba in an online article (it’s in Arabic, but has a lot of very nice photos). The Kaaba is never entirely uncovered during the entire process. The Kiswah costs about 5.3 million dollars, and is replaced every year. 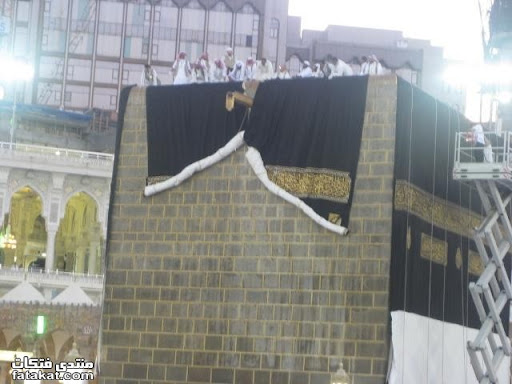 In the photo below, the hand belongs to Fareed, who has been sewing the gold and silver threads into the Kiswa for more than 30 years. Embroidering the Kiswa is extremely prestigious work, and is done entirely by men.

Finally, here is a very detailed documentary (in English) about the making of the Kiswa. It’s really interesting, and covers everything (history, religious background, dyeing, weaving, printing the design, embroidery, installation, etc etc etc). The section on the embroidery part of the process starts at 19 minutes, 40 seconds if you don’t have time for the whole thing. The video of working the goldwork is fascinating.

This entry was posted in Embroidery around the world, Goldwork and tagged embroidery, goldwork, Islam, Kiswa, Kiswah. Bookmark the permalink.

9 Responses to Kiswah: Religious goldwork on an enormous scale