A lot of blogs have linked to the NPR story on the French embroidery studio Maison Lesage, plus Dr. Shirazi sent me the link. It’s about tambour embroidery, which is the type of embroidery used in French fashion embroidery. This is worked with a tambour hook instead of a needle, and incorporates beading and sequins. Maison Lesage is now owned by Chanel, but it’s actually 130 years old. Here’s a video about it:

Indian embroiderers also use this tool. Here is a video of silver Zari work with the tambour hook. That’s some fast stitching!

I decided to try this myself! The traditional tambour hook is a crochet hook with a pointy tip to pierce the fabric. I bought a slightly altered one (since it was easily available), called the Clover Embroidery Tool. It has an extra spring latch on it so the hook doesn’t catch on the fabric. 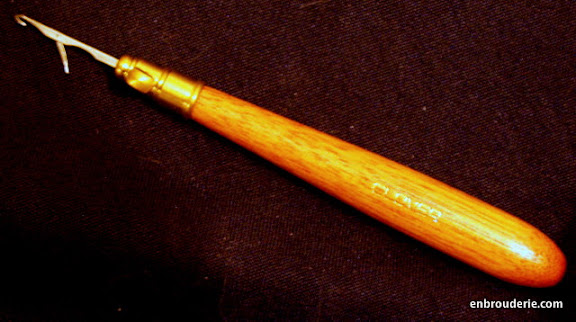 I imagine it takes a little extra effort to learn the one without a latch, but it’s probably worth it if you have very fine, very closely spaced work where the latch might get in the way. I’m just experimenting now though, so I don’t mind. There is an instructional video from the Clover company:

For my experiment, I used a black cloth napkin from thrift shop (36 cents!), plus a couple of packs of beads (purple and yellow). I had no design, just stitched randomly. Basically, the hook produces chain stitching on one side of the fabric (see the line at the left of the photo below), and something that looks like backstitch on the other side (see third line from left in the photo). If you add beads to the linear side, you get the line of beads (second from left). 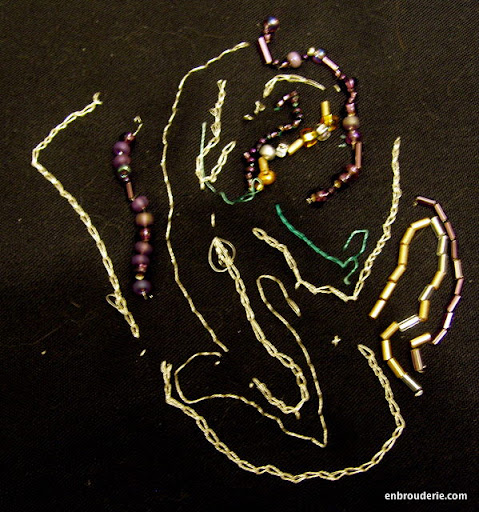 I’m still very clumsy but improving rapidly. The first thread I tried (the green) kept snapping and dumping beads everywhere. The silver worked much better. Whenever the thread is too loose, it slips off the hook and the thing unravels, so tension is important. My stitching is not very even yet, and I don’t turn corners well. However, my beading and chain stitch are definitely improving and starting to look very cool! I can already tell that with a little practice I could cover a lot of ground very fast. I believe my past experience with crochet is also helping.