I know you’ve been waiting anxiously for another round of pictures (see Part 1). So here they are! I also asked my dad to find out what the Chinese characters (百鸟朝凰) at the top say (he’s been learning Chinese for fun). The answer is super interesting!

The characters say 百 (Hundred) 鸟 (Birds) 朝 (Approach in Homage  –  you could say “adore” in the Biblical sense that the Magi adored the baby Jesus)  凰 (Phoenix). So, literally, the embroidery is “100 Birds Adore the Phoenix.”

The bird with the enormous tail feathers is a female phoenix, a huang.  You can check out FengHuang in Wikipedia for the Chinese legend of the Phoenix.

These characters are an ancient saying from the Book of Tang, which was presented to Emperor Chudi in 945 AD.  The saying means that some one is very virtuous and highly respected by people (like the birds look up to the phoenix).

This is a traditional subject in Chinese art (example photo: phoenix sculpture in the Forbidden City in Beijing). It’s a happy symbol and also the name of a traditional folk song, often played at weddings and New Year celebrations.

There are thousands of these 4 character standard sayings in Chinese.  They are like proverbs in English that always use the same words – for example, “Early bird catches the worm.”

And now, more photos! Come back next week for close up photos of the birds near the ground. If you are impatient, here is the link to the Google Image search for 100 Birds Adoring the Phoenix (lots of beautiful photos). 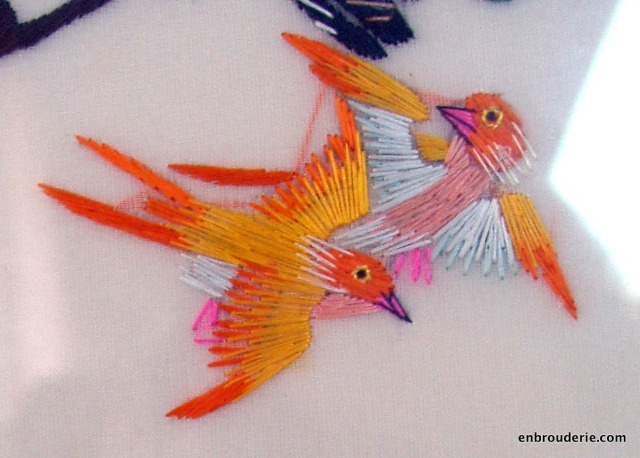 This entry was posted in Embroidery around the world and tagged Chinese embroidery, 百鸟朝凰, embroidery, hundred birds, phoenix, silk, 刺绣. Bookmark the permalink.

5 Responses to One Hundred Birds: Part 2